Have you seen this?

Building your brand as a DJ is an essential part of your marketing strategy. For an in-depth look at how you can market yourself better, I would recommend you read the Ultimate Guide to DJ Marketing to get you started.

One aspect I covered in depth in that guide was how you can increase your DJ brand exposure online, but I didn’t cover the Spotify platform at the time.

At the time of writing this post, Spotify is still relatively new, and I will be honest, I had never really used it before to help increase the exposure of the DJs on my agency roster or as a marketing tool.

Over the last 6 months I’ve been extensively playing with it to see how it can positively impact the artists and producers at my DJ agency. I’ve had some great results.

I’d like to now share with you my findings on how DJs can use Spotify to increase their brand, and add it to their DJ marketing strategy.

The reason I think Spotify is so important for DJs right now is down to a number of reasons.

Early last year, the company launched something called “playlist targeting”. This let brands use Spotify to target specific audiences based on their activity and music tastes.

Whilst this is a paid for feature, it gives you an idea on how powerful this platform can be for targeting users. As DJs and producers, we can also do the same, albeit on a free basis if we wish.

Now you probably already know about Spotify and how it’s completely revolutionized the way in which people consume and listen to music.

There’s no doubt in my mind that’s it’s only going to get bigger too, as more people sign-up to it and start discovering new music, or following existing artists they already like.

You can see for yourself with these Spotify usage statistics from 2012 to 2017 at the growth the company has experienced. I would imagine this is only going to increase, so for DJs it offers a huge volume of people they can potentially raise awareness with.

Just look at how many subscribers Spotify has. Those numbers on the left are in millions by the way!

This is an untapped audience that you, as a DJ, is currently not marketing to.

How to Use Spotify for DJ Marketing?

There are some very simple ways in which you can leverage the power of Spotify to strengthen your DJ brand, engage with your existing fans, let new fans find you, whilst getting your music and recommendations out to a massive audience.

Without further ado, here are my essential tips on how DJs can use Spotify to market themselves better and build-up their DJ brand even further.

Remember the days when you could buy DJ magazines and they would have some big-name DJs of the time listing their top 10 tracks of the month? 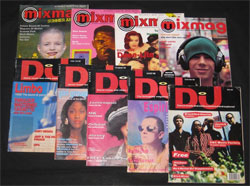 You can do the same with Spotify.

All you need to do is create a new playlist each month (or weekly) which contains the top 10 tracks you are playing out in the clubs at the moment.

By curating this top 10 list which is updated regularly, chances are you could become known as the leading curator of new music in your particular DJ genre.

For example, let’s say you are a DJ in the psy trance scene, you might title your playlist as the “Monthly Top 10 Freshest Psy Trance Tunes by DJ Unknown” – it’s a sure-fire way for you to help increase your Spotify followers month on month, bringing increased exposure to your name as a DJ.

Tip 2: Create Playlists on a Current Theme for Media Mentions

This one will require a little bit creativity.

There have been numerous examples in the media recently about how people have creating timely Spotify playlists that jump on a theme in the news, with the playlist creator has been featured in the media as a result.

Not sure what I mean?

In February of 2017, Four Tet, a London music producer put together a Spotify playlist of music from Muslim countries Donald Trump has banned from US. His creative move was featured heavily in the UK press and abroad.

Whilst Four Tet’s move was meant as a political statement, it has undoubtedly raised his profile in the industry. So “win-win” for Four Tet.

Here’s another example where a girl broke-up with her boyfriend by, yes you guessed it, creating a Spotify playlist. See the Twitter tweet about this below. Very funny, and resulted in her getting thousands of new followers and plays on Spotify.

So my sister has gone on a couple of dates with a guy named Wyatt but she likes someone else so she made him a Spotify playlist and… pic.twitter.com/kJmgrUBwqb

Tip 3: Create Fun Playlists Depending on Your Mood

Whilst your fans might know you for playing one particular music style, what about when you are having down-time outside of the clubs?

It might be that every morning you need a particular type of music to wake up to and have your first coffee of the day with. If that’s the case, then curate that playlist and share it out there.

Similarly, you might like a certain type of music when you go the gym to help you work-out.

Some of the most popular playlists on Spotify are focussed on life-events, so for example “Music for the Running Machine”, or “Coffee Morning Wake-Up” tunes.

It will give your fans and followers a unique view into you as a DJ and artist, and will give them an insight into your real-life outside of DJ’ing. Human connection-based playlists offer fans an interesting perspective on who you are outside of your performances behind the decks.

If you are struggling for ideas, then take a look at this infographic that shows trends of Spotify playlists throughout the day. Some great inspiration for sure!

Tip 4: Promote Your Playlists to a Wider Audience

There are various ways in which you can promote your Spotify playlists to increase exposure and followers. Some that you should consider include:

Finally, think of ways in which you can promote your curated DJ Spotify playlists. This will help when using Spotify as a marketing tool, as it should encourage more followers, sharing, and exposure.

We’ve embedded one below to show you an example of how it could work for you.

If you are not promoting and posting your playlists then you are missing out on what is a really good opportunity currently.

Showing the world that you are an enthusiast for not just the music you play, but also other genres can only strengthen your brand and position as an expert.

link to The Ultimate DJ Marketing Guide to Promotion: How to Promote Yourself as a DJ (Online & Offline)
You’ve spent hours, days, weeks, months, and perhaps even years learning your craft in the bedroom as a DJ, and now feel it’s time to get club or event gigs. But how can you promote yourself as a DJ? Not just online or in a particular music genre or industry, but also offline, perhaps in […]
Continue Reading
link to How to Fail at DJ Marketing: What Not to Do When Promoting Yourself as DJ
Marketing yourself as a DJ is key to success, and can help you to form a long and rewarding career in the music world. But as with any form of marketing, you can get it wrong. Where I so often see DJ’s failing at marketing and promotion is online. So often, less is more. I […]
Continue Reading

The DJ Den website is an active participant in the Amazon Services LLC Associates Program. This affiliate advertising program is designed to provide revenue and advertising fees by recommending and linking to amazon.com products. As an Amazon Associate I earn from qualifying purchases.